What is Tubi TV?

No cable, no problem! Tubi TV is a free, ad-supported streaming service owned by Fox, with 33 million monthly active users mostly based in the United States. The company has also expanded into Canada, Mexico, and Australia.

Tubi offers a massive library of 23,000 licensed titles. Unlike some of the other streaming players, however, Tubi does not produce original content and has no current plans to make that leap. CEO Farhad Massoudi describes Tubi as the AVOD “broadcast TV” to SVOD’s “premium cable” — more of a compliment than a competitor. 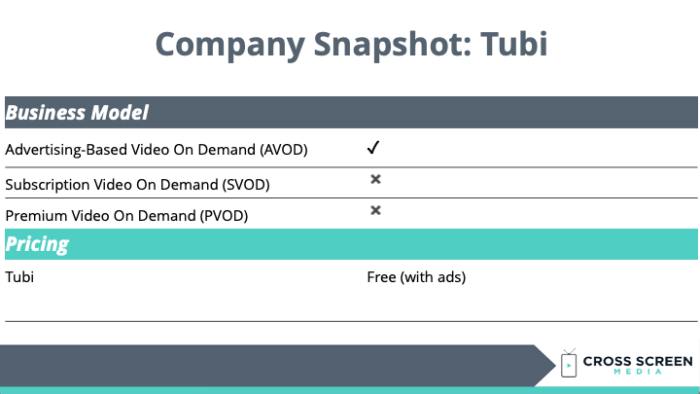 Like many of the other streaming players, Tubi has seen a significant uptick from consumers staying at home; CRO Mark Rotblat says the company saw a 50% spike in viewership at the start of the pandemic, which it has maintained. The company spent roughly $100 million on new content in 2019 and said it would spend similarly this year. Tubi is well-positioned in a rapidly growing market, with AVOD revenue growing an estimated 38% since 2018.

While original content is not on the roadmap, Tubi has branched out to live local news, beginning with Fox-owned local stations. Tubi also offers a channel of exclusively child-appropriate programming, differentiating itself from some AVOD competitors.

With many consumers equating streaming with SVOD platforms like Netflix and HBOMax, Tubi is set to shift the paradigm by benefiting both advertisers and consumers. While Tubi relies on advertising for revenue, ads only take up 4-6 minutes per hour of programming. This ad load is less than half of traditional linear, a ratio which may (Tubi hopes) translate to more hours spent on-platform.

Although there are fewer available ad slots per show, advertisers benefit from the growing pie of total viewing hours and often more affordable CPMs on streaming platforms like Tubi compared to traditional TV. Tubi has been deliberate in making sure advertisers are able to reach their most relevant audiences through granular segmentation and a partnership with credit reporting union TransUnion, which provides addressable TV insights that enable advertisers to tailor their ads to distinct viewers.

Sticking to a free, AVOD-only business model is core to Tubi’s growth strategy. The company hopes its lack of subscription fees will make it attractive for users who feel they’ve “finished Netflix.” Massoudi, Tubi’s CEO, told Fast Company his service is more similar to YouTube than Netflix or other paid services in that the focus is less on “marquee titles” and more on offering a breadth of content.

Although Tubi trails other services in average user viewing time (6.5 hrs/month/user according to Variety), that gap could close as Tubi continues to build its library and expands even further into the live television and local news space. In addition to Fox stations, Tubi offers access to CBC, Bloomberg TV, and several other news and weather options.

What does Tubi TV’s growth mean for Convergent TV advertising in the future?

A 2019 survey by PCMag found that 40% of respondents would be willing to spend up to a total of $20 on all their streaming services and that, on average, respondents were willing to spend $33, in total, for streaming content. Beyond those limits, “subscription fatigue” sets in. Tubi is banking on consumers hitting that spend wall and looking for AVOD options to fulfill their hunger for more content. This strategy’s success is contingent upon Tubi continually acquiring content that attracts viewers.

Tubi isn’t betting on licensed content alone, however. The company is planning a major expansion of its live television options into news and sports, the last remaining categories that still boast strong viewership on linear TV.

With no cable subscription required, this approach could significantly accelerate cord-cutting even among more resilient demographics, especially if other players follow Tubi’s lead. Live programming could also serve as a gateway to the rest of their content library, driving up retention and viewing hours among their base.

With a differentiated business model and a content library three times the size of Netflix, Tubi is well-positioned in an increasingly crowded field.

We’ll keep this page updated with new developments; check back for the latest as Tubi transforms Convergent TV.

‘Big Screen’ Is The Big Winner For Impressions During Lockdown