What does Hulu’s Focus on Innovation Mean For Convergent TV?

Hulu is no Netflix – by design. With 39.4 million paying subscribers as of Q1 2021, Disney-owned streaming service Hulu is a fraction of the size of competitor Netflix, which has surpassed 200 million. However, Hulu is unique in its innovative pricing structure and willingness to experiment with ad formats.

Hulu subscribers can pay anywhere from $5.99 a month to more than $120, depending on whether their selection shows ads, includes live TV, or comes with other add-ons like cloud storage and unlimited screens. It is also available as a bundle with its family members Disney+ and ESPN+.

Like its competitors, Hulu boasts an impressive range of licensed TV and movie content and has increasingly invested in original content in recent years, such as their Emmy Award winning drama The Handmaid’s Tale.

Hulu’s live TV offerings differentiate it from streaming services like Netflix, and make Hulu a well-rounded convergent TV advertising option. But while Hulu offers access to both the streaming and live TV worlds, only 4 million of Hulu’s users reportedly opted for plans that included live television, down from 4.1 million, in Q4 of 2020.

What does Hulu’s focus on innovation mean for convergent TV advertising today?

Hulu is already unique in its range of AVOD and SVOD pricing tiers, and the company is doubling down on this advantage by continuing to introduce new ad formats.

One such format is “pause ads.” These are translucent banner ads that appear on the screen when the user hits pause, and persist until the user resumes the program. This format is a win-win-win: it does not interrupt the viewing experience, advertisers can get above-average view duration of their message, and Hulu drives additional revenue from natural pauses that otherwise would go un-monetized.

Hulu also released an ad format for binge-watchers that offers users a reward between the second and third episode, such as a commercial-free episode. Like pause ads, ads tailored to binge-watchers are less disruptive and better complement the flow of programming.

Hulu is the vanguard for an AVOD offering with a consumer focus. The result is that Hulu is well-positioned to grow and compete with ad-free SVOD competitors. And since Hulu’s ads allow it to offer lower price points, the service may be able to scale more rapidly.

What does Hulu’s focus on innovation mean for convergent TV advertising in the future?

Democratizing the ability to run ads could greatly expand Hulu’s advertiser base.

Hulu has launched  Hulu Ad Manager, a self-serve ad buying tool that allows smaller businesses to purchase ads at lower minimum prices, without having to go through Hulu’s sales team. To complement this SMB focus, Hulu recently announced their Creative Partner Program to offer end-to-end support for smaller enterprises to advertise on Hulu.  Google and Facebook have offered similar tools for years. 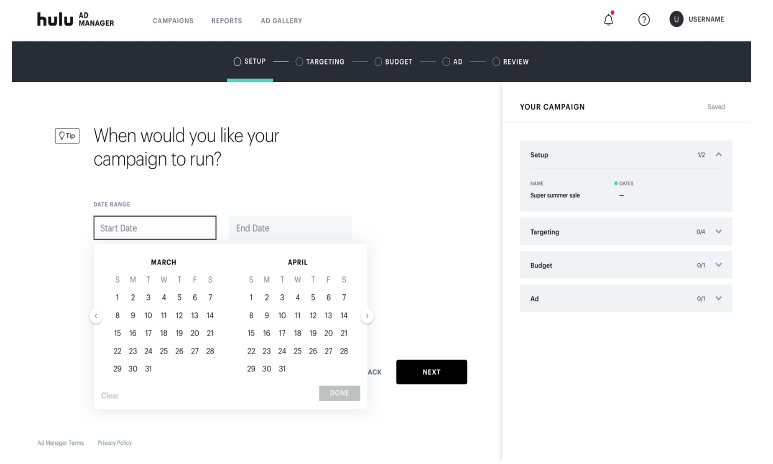 Hulu’s continued incorporation of advertising may also make its business model more sustainable than that of ad-free competitors. Several ad industry executives think Netflix, for example, will need to start running traditional ads in order to grow. So while Hulu may be behind on subscriptions in the short term, it could be ahead in other ways that will matter more down the road.

We’ll keep this page updated with new developments; check back for the latest on Hulu.